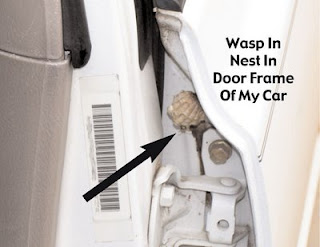 ...how I consistently come up with so many ideas. And I tell them I can't help it – they're all around me – they just happen to me – every day.
Today, for example, as my daughter was getting ready to put her kids in my car so that we could all drive up north for a fun day with my doctor, the moment I opened my car door, I got chased around my yard by a wasp. Who could have guessed a family of wasps was camping out in the door frame of my car and that I had enraged them by attempting to move their home.
Bees, hornets, wasps – stingers frighten me. They would frighten you too if you were told at the age of 13 that you were allergic to bees, and that three stings would kill you. Especially if the doctor didn't explain if he meant all at once or over a lifetime. And what about hornets and wasps? It was enough to drive a perfectly rational person into a state of insanity. And if you ever saw me (or my mother or my sisters) anywhere in the vicinity of a bee, you would understand. Or not. You would probably have any one of us committed.
But getting back to the wasp...after I noticed the nest, we all decided to ride in my daughter's car. I kept wondering what might have happened if we hadn't noticed the wasp nest, and about how ironic it would have been to have died from an allergic reaction to a wasp sting while on my way to see my allergist.
I could think of nothing else the whole day and waited until nightfall to drown the nest in bug spray. I read the directions on the can carefully, and with legs wobbly, snuck quietly to the car hoping the wasps wouldn't hear the jackhammer in my chest as I neared their new home.
I opened the door and prayed they were all sleeping. At first I couldn't find the nest. It was too dark. I envisioned them smelling my fear and attacking me all at once as I aimed the can at the hive, afraid I might be holding it backwards. There I would have been, a swollen mass of bumps, dead in my own driveway. I sprayed and sprayed and sprayed and sprayed until I was standing in a puddle of bug spray.
I looked again at the directions. It said to wait 24 hours before removing the hive, but it didn't say how to remove it, or where to put it.
I see no way out of this. I'm just going to have to get rid of my car.
Posted by Theresa Wiza at 8:03 PM