My Bravest Blog Yet 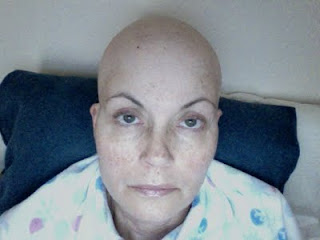 As a result of that significant amount of hair loss, I decided to shave the rest. Hair cascading down my back and legs felt like a bunch of wet chinchillas racing for the drain. Scary feeling, even though I knew what it was. I had to shave, because I didn't want that experience anymore every time I showered.

As far as this blog is concerned, I'll be honest – I hesitate posting it – partially because I feel embarrassed by the way I look. But I am only one of an enormous number of women who are experiencing the same problem, and I thought – why should I hide in shame?

Through it all, I try to write, but my writing has slowed significantly. I used to say that my 11-hour a day daycare was the reason I couldn't devote much time to writing. But now I have another reason – the chemo completely drains me and makes me feel as if I'm carrying a thousand pounds uphill through quicksand.

I lie in bed and rest. A lot. I can do almost nothing else. I try to drink lots of fluids too.

I'm probably losing weight, because eating is no longer enjoyable. My tongue feels as if it has sores covering the surface (it doesn't), and my lips feel as if they are on fire – always.

Added to that problem is a respiratory infection I developed, something that usually accompanies me every October with the high mold count and my asthmatic allergy to mold. But, because my resistance is low due to the chemo, cancer took advantage of my weakness and quickly turned what could have been just a cold into a full-blown infection. My breathing is now labored and I have difficulty carrying on a conversation. I am taking medication to fight the respiratory infection and hope to be rid of it by early next week.

And so, with some trepidation, I am showing you just how the chemo has affected my looks. I saw no point in putting makeup on myself in the bald photo. Nor did I see any reason for getting out of bed. Even a trip to the shower exhausts me. I do practically everything from my bed now, at least for the first week after chemo, and my last infusion was delivered on Tuesday.

For comparison, I've included a photo of the me that I was (the day just prior to my first chemo treatment) next to the me that I am (three and a half weeks later). What a difference, huh?

My fight has just begun. I am a worthy opponent to this cancerous invader. What was a 4 cm. wide tumor before my first treatment was not even detectable by my oncologist just before my last treatment. The tumor had shrunk that much!

Today, on Halloween, I received a shipment of hats and scarves from one of my dearest friends, Denise (thank you, Denise). I have a wig on hand and a wig on order. I can now change my looks every day, and as soon as I feel up to going anywhere, I will put on some makeup, walk out of my house with my head held high, and nobody who sees me will know that I have cancer.

At least until the hat or wig blows off. Midwestern winds are fierce! My second oldest daughter, Lindsey, told me the story of a woman (wife of her boss) whose sister had cancer and made the mistake of crossing a bridge when the wind picked up her wig and blew it into the Chicago River. I used to work just across the bridge on North Michigan Avenue (Michigan and Wacker) and I can attest to the wildly windy conditions. I will not be making any trips there any time soon.

One positive – I may look younger with my new wigs (I decided to get them without any white or silver at all). I haven't been without white hair in ten years!

So while you congratulate me on winning this fight, as I continue to write and hope that people will read what I write, I invite you to read some of the things I have been able to post (see below), and I wholeheartedly accept every prayer you send my way.

For more about my breast cancer journey, read Diagnosis: Breast Cancer – Part I.

(I wonder if, after I post this blog, I'll see hair replacement ads accompanying it.)

Posted by Theresa Wiza at 12:48 PM 6 comments: Links to this post

Writing Tips from a WINNING Entry!

I entered a writing contest and WON!
My 21 BEST Writing tips are culled from the many mistakes and blunders I've made over the years. Like any writer, I am constantly looking for ways to improve myself, and I include lessons I've learned along the way.
Much of the information I gathered and shared in this article came from my many writer friends who cared enough to impart their wisdom to me and from instructors who chiseled a writer from the blob of creativity that awaited form.
From the first amazing choice I made of returning to college to finally being able to congratulate myself for finishing projects amidst the chronic, incessant, and unrelenting interruptions that define my life, I now consider myself to be an accomplished writer. I invite you to click any of the links in this blog so I can share with you my discoveries.
Writers are a helpful bunch of people, by the way and, with that thought in mind, I would like to share one more thing with you. If, after reading the article, you think you would like to write for Xomba, please use my referral number: 777d7f91. I'm known as BlogWriter there and the article, My 21 BEST Writing Tips, won $250 in their most recent writing contest. They are a very generous site and I enjoy writing for them.
Posted by Theresa Wiza at 8:14 AM 1 comment: Links to this post

One in eight women will be diagnosed with breast cancer. I am one in eight. Today I experienced my first round of chemo.
I wrote an article about everything leading up to today and posted it on Associated Content. If you are one in eight, or if you have a friend or relative who is affected by breast cancer, I invite you to read about my experience with the diagnosis by clicking Diagnosis: Breast Cancer – Part I.
Forgive me for this post being so short. I am feeling a little tired today.
Posted by Theresa Wiza at 1:51 PM No comments: Links to this post