Posted by Theresa Wiza at 10:26 AM 2 comments: Links to this post

The fact that I hadn't written anything that anybody other than I and my teachers had ever read didn't matter. I KNEW I would be famous if only SOMEBODY would recognize my talents.

But that old familiar merry-go-round rang in my ears with every phone call:

I recognized the ride. I had that same experience when I was living in New York.

The next best option was to get a job. Having worked for attorneys in Chicago, I applied at law firms. Working for a California criminal lawyer, would have been great. But I was in Del Mar (near San Diego), a little too far away from my dream city. A Los Angeles criminal defense lawyer would have brought me closer to my dream, but I encountered one major problem I hadn't previously anticipated.

Del Mar, at the time, offered no public transportation. I had no way of getting to any job. I packed up and went home, defeated.

Fast forward to now. The dream is still alive. I've attended seminars, read books and magazines, written blogs, articles, books, and screenplays. I've also entered some contests, the results of which won't be announced until October, 2012. I'm not yet where I want to be, but I abide by George Eliot's quote, "It's never too late to be what you might have been."

If I could give the younger me some words of advice about making it in the writing business, especially in the field in which I would prefer to write (screenwriting), I would say to myself, "Study, learn, read, and prepare."
Posted by Theresa Wiza at 7:19 AM 1 comment: Links to this post

My whole life came to a halt this week with one of the most debilitating migraines I've ever experienced. You can read about it by clicking Migraine With Vertigo, where I discuss migrainous vertigo and benign paroxysmal positional vertigo (BPPV). Though I was incapable of doing anything, including walking, I was happy to see this morning on the front page of Xomba two previous articles I had written for them, which appear today on their Featured page: 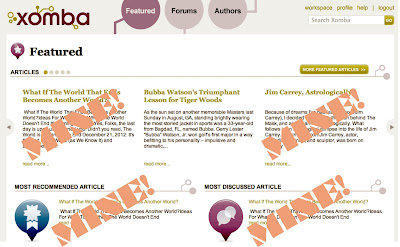 Once the dizziness leaves me completely, I will be writing more. Until then, if you would like to read more from this author, please click the upper right hand side of this blog under the donate button.
Posted by Theresa Wiza at 7:30 AM No comments: Links to this post

How to Come Up with Great Ideas 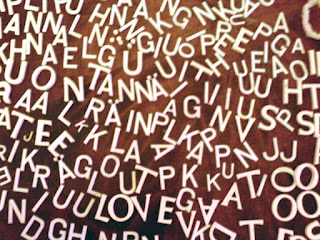 When I was 10 years old, I knew I loved to write. I never thought I would make a living from it, because I didn't realize anybody COULD make money from writing, but I loved the process and I loved seeing the results of my imagination take form on paper.

But after writing my first "masterpiece," I panicked. WHAT IF I NEVER HAD ANOTHER GOOD IDEA?

The thought was paralyzing. Where might I find another good idea?

As it turns out, the answer to that question turned out to be – EVERYWHERE.

And from "everywhere" I mean that I found inspiration to write from:

• conversations with friends and family

• watching children engaged in sports or other activities

• interesting web sites such as those found at Time

• creative television programs, such as The Nate Berkus Show

• funny television shows, such as The Ellen Degeneres Show

• humor sites such as Humor Outcasts

• inspirational books, including the Bible

Did any of those spark even the slightest hint of an idea for you? No? Try combining some of the ideas mentioned above. For instance, suppose you write about a dream you had where you and Nate Berkus travel through space together and create an actual magic carpet that, when you step upon it, you transform your entire life.

Or you've just come up with a humorous spin on a new invention that promises to become the newest hobby craze.

Once you come up with an idea, record it in the notes mode on your smart phone, on a pad of paper you leave next to your bed, anywhere – just record it. After a while you'll be able to connect one idea to the next and before long, you'll have completed that book, that article, that blog, or that screenplay you've always wanted to write.

Need more help? Find out how to boost your creativity by reading The Creative (Writing) Spirit and how to prevent writers block by reading Writers Block – the Key to Unlocking the Block.

Most of all, PLAY with your ideas. Have fun with them. If you enjoy them, the likely result will be that others will too.

Want to read more articles and blogs by this author? Click the link under the donate button on the right hand side of this blog.

Posted by Theresa Wiza at 6:07 AM No comments: Links to this post

Once upon a time a pretty princess used her wiles to weave a web so creative it took on magical powers that sprinkled delight and imagination all over the world. When knitted together, the results of her magic not only resembled the characters on the highly successful television program, Once Upon a Time, but also connected with a prince who built a fan web site that allowed her powers to manifest in ways so exciting, it brought a whole new world into existence – Once Upon A Fan…

I began this post with the common opening phrase – Once upon a time – because this post is about the highly successful television program, Once Upon a Time.

Are you a fan?

I am – and for several reasons! Once Upon a Time is one of the MOST creative shows on television. As a writer, I am always fascinated by other writers who use their talents and imagination in extraordinary ways. The writers of Once Upon a Time are two of the most imaginative and compelling writers I've never met ;)

Adam Horowitz and Edward Kitsis, the writers who conceived Once Upon a Time, previously wrote for Lost; their creativity is no less fascinating in Once Upon a Time, which captured my interest from the first episode. What's more, OUAT is becoming more and more creative with each new episode. The back and forth drama from Storybrooke to the Enchanted Forest brings viewers back time and time again. The characters themselves are enchanting and the story line is absolutely captivating.

If you ever miss an episode of Once Upon a Time you can watch the Latest Full Episode by clicking the link. I was so thrilled when I discovered, after missing my show one Sunday, that I could still watch it, I clapped my hands, jumped up and down with glee, and giggled like Robert Carlyle's character, Rumplestiltskin, does.

My oldest daughter, Keeley, who knows how much I love the show, told me, "I know the person who designed the fan web site."

"Yeah, she's the sister of my friend, Barb. You should friend her. Her name is Laura Foster."

Friend her? Of course I will! What an exciting connection! (I adore creative people and I'm fortunate to know many.)

Gareth Hughes (*SEE NOTE BELOW), creator of the fan site (prince in my opening story), had asked Laura (the princess) to act as the moderator/administrator of the site. Laura tells me that the actors and actresses of Once Upon a Time like the site so much, Once Upon A Fan often receives photos, tweets, and emails from cast members. 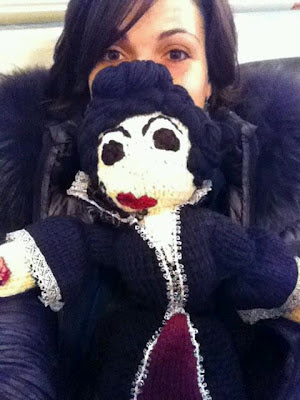 I probably should have guessed that the person who moderates the Once Upon a Time fan site would be creative in other endeavors as well. Laura is not only a talented web designer, she is also a gifted knitter. Laura knits Once Upon a Time dolls, which she has given as gifts to cast members of OUAT. As you can see by the above photo, even cast member, Lana Parrilla, considers them to be amazing likenesses!

According to Laura, "Lana Parrilla (the evil queen) saw the doll of her and asked me for it, then sent a pic of her holding it. Robert Carlyle has the original Rumplestiltskin and the original Mr. Gold dolls and he's promised us a pic when they get back from the break."

Cast members aren't the only ones who can own a Once Upon a Time doll – you too can purchase the dolls from The Cheeky Girl by clicking the link. You can also visit the Once Upon A Fan site for all kinds of show information, cast conversations, and updates.

The above post appears in both of the following blogs: All Craft Connection and Writing Creatively.

Posted by Theresa Wiza at 6:38 AM 2 comments: Links to this post