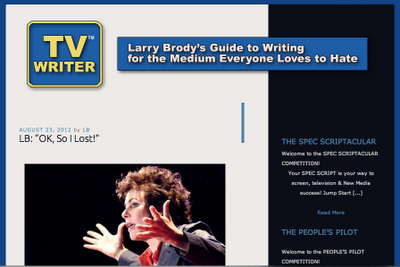 As a subscriber to TVWriter.com (subscribe HERE if you want to know how to write for TV), I receive notices every time somebody posts a new blog related to television writing. When Larry Brody posted a blog on his web site, TVWriter.com™, asking for suggestions, I sent an email asking if TV Writer listed a resource that offered specific TV program scripts for prospective television writers. I also wanted to know that if TV Writer didn't offer a link to scripts, where might I find samples?

Brody is an experienced television writer and the author of a teleplay writing book I won in a Writer's Digest contest. His book, Television Writing from the Inside Out, provides readers with valuable information from somebody who actually works in television.

Knowing that reading good scripts is a great lesson in learning how to write a good script, I wanted to read as many scripts as possible. So when I received his email telling me about an ongoing thread on TV Writer, I was embarrassed to admit that I'd never seen that thread. Why? Because I read only his blog posts and didn't notice the all-caps COMMUNICATE title at the bottom of the sidebar that listed OUR MESSAGE BOARDS.

Nor did I realize that the screenwriting program I've owned for several years offered templates for specific TV programs. OK, actually, I knew Final Draft had the templates – I just forgot about them because I didn't know where to find them. But thanks to Larry Brody and a little research, I now know the drill: Final Draft to Format to Elements to Apply a Template to (scroll down) LOTS OF TV SCRIPTS – a virtual treasure trove of them!!!!

In my defense, I have a problem with distraction, especially when somebody else incites those little synapses in my brain to explode with more ideas. Even while I read – for the second time – Television Writing from the Inside Out, I am aware that my mind wanders. The words stare out at me from the page, my eyes glide across them as I work out how I will implement his strategies, suggestions, and tips, and suddenly I'm in the middle of a page with no recollection of what I just read.

I'm considering setting a timer for every three minutes so that I can remind myself to pay attention to what I'm reading. The incessant chattering that continually runs through my mind interrupts me constantly.  Because I didn't make even the quarter finalists in the most recent TV Writer Spec Scriptacular Competition, I am determined to read this book again with new resolve. Perhaps shock therapy might work...

In the meantime, after discovering this expansive library of television scripts and screenplays, I feel exhilarated, like Belle when the Beast offered his library to her in Disney's Beauty and the Beast. Yes, I'm clapping my hands and jumping up and down with excitement! A whole library filled with scripts, scripts, scripts! Hmm, maybe that means Larry Brody is the Beast!

Kidding. Thank you, Larry Brody and TVWriter™ for introducing me to my future (admittedly I live in a fantasy world where my future consists of living my dreams as a television and screenplay writer – then again, my life could be just one big cosmic joke or perhaps I'm being tested on how long one human being can tolerate waiting decades and half centuries before she becomes a successful screenwriter).

I'd like to interrupt this blog to add an appropriate quote here: "This life is a test – it is only a test. Had it been an actual life, you would have received further instructions on where to go and what to do..." Jack Kornfield

And now back to the blog, but before I get to the link for all those television scripts, I want to draw your attention to a blog that makes up for the loss I incurred when I discovered I was not one of the winners in the Spec Scriptacular Competition. Curious? Click THE BLOG THAT MADE ME ONE HAPPY WRITER.


And now for the finale, the pièce de résistance, the amazing list of scripts – click THIS THREAD at TVWriter™.

OK, so I'm not good at ending things. I'd like to add that if you would like to read Brody's blog post concerning this very issue (script resources), read LB Answers: “Where Can I Find Scripts for Current Shows?”

Yes, I lost the screenplay competitions I entered, but I don't consider myself to be a loser. I tried.

What those competitions taught me is that I have to keep learning. I now know what I have to do to make all of them better. According to experts, one thing that will dramatically improve my screenplays is adding more conflict. Apparently I, along with numerous other non-winners, didn't include enough of it. So I have to go back and add more conflict.

In every good movie, conflict requires the protagonist to experience spasms of guilt, fear, or some other deeply emotional pain in order to become a better person or to successfully achieve what might be considered to be an impossible goal. And yes, even comedy requires those same types of conflict.

Probably the strongest example of a woman experiencing one of the most excruciating forms of conflict I've ever encountered occurs in the 1982 movie, Sophie's Choice, starring Meryl Streep, Kevin Kline, and Peter MacNicol. If you have never seen the movie, I won't relate the details, but it tugged my heart so hard that I felt it nearly rupture in my chest.

Sophie's Choice was agonizing to watch. The atrocities that occurred in Nazi concentration camps couldn't have been more aptly portrayed if Alan J. Pakula (who wrote the screenplay based on William Styron's novel, Sophie's Choice) had invented a time warp that sent the audience to live in an actual concentration camp. But it was the choice, the awful choice Sophie had to make, that was the crux of the movie, that was the most painful part of the movie to watch, that ripped my heart out of my chest, that caused me to lose my breath.

In all honesty, my screenplays don't make that connection to my audience. The funny ones are funny, and the touching ones are touching, but they fall short of connecting to anybody who doesn't know me.

And therein lies the challenge. If my viewers can't completely immerse themselves into my movies, I haven't done my job as a writer.

So I'll go back and revise, revise, revise. And while I don't think I want to plunge so deeply into my audience's souls that I will create another Sophie's Choice, I want to leave viewers with a sense of joy, a sense of wonder, or at least a desire to want to see another one of my movies.

The journey from screenplay to film is a long one, but every step I take, every lesson I learn, every ounce of effort I put forth takes me one step closer to achieving my dream.

Want to read more from this author? See the sidebar.

How to Learn Meanings for Abbreviations & Acronyms

Like many people around my age (and older), I was completely oblivious about such acronyms as LMAO, TTYL, and other (now obvious) shortcuts. I grew up speaking and spelling actual words. The only acronym I knew was TGIF, but that acronym became a restaurant and I don't know if anyone uses it anymore in its original intent, because if, on a Friday, you say, TGIF, people will think you're going to TGIF.

Life must be too short and too busy to spend a lot of speaking too many syllables and typing such time-consuming words as, "Laughing My Ass Off," and "Talk To You Later." Seems everyone – well, kids mostly – like to abbreviate everything, and listening to them is like hearing a foreign language.

So what's an old person to do to keep up?

I'll tell you! Want to keep up with all of the latest acronyms and abbreviations. Look no further than The Web's Largest Resource for Acronyms & Abbreviations! (click the link) Look through their list or use their SEARCH box!

Posted by Theresa Wiza at 4:46 AM 2 comments: Links to this post

Outright is a FREE online accounting tool for writers, business owners, and anyone who needs to track income, expenses, and more. Just read the following to determine if Outright and YOUR business will make YOUR business an OUTRIGHT SUCCESS:

Brought To By Outright.com
Posted by Theresa Wiza at 7:47 AM 2 comments: Links to this post