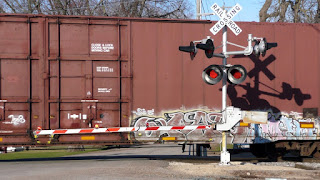 Growing up in the Midwest, specifically in Dolton, Illinois (home to Jane Lynch's high school), I have become an expert train waiter. You have to be when you live in train-track towns like Dolton. Trains never move and you either learn to be patient or you get out of your car and draw graffiti all over the train. I'm betting one train is probably still sitting on the tracks from when I was 20 years old.

When my oldest daughter was young, I drove her to her babysitter who sat in a home on the other side of the tracks. So when I got off work, I would take the bus to my bus stop, walk about a block to my car, and drive to the babysitter's home to pick up my daughter.

On the day I'm about to mention, the weather was freezing, though the puddle the bus driver hilariously dropped me into, due to traffic, had not yet frozen.

I should probably give you a little background here. I was a young woman who had just gained newly-acquired adult status and who knew nothing about paying bills. I stupidly took a job where my income did not quite meet my expenses (by several hundred dollars), so I drove the only car I could afford.

Not particularly fond of shopping and because I didn't have money to shop, I wore whatever clothes and shoes I had, never dreaming that the hole in my boot combined with no heat in my car, and factoring into the equation an evil bus driver who, after driving from Chicago to the far south suburbs, dropped me into the only puddle on the entire street, and, well, you can probably understand the gravity of the situation. When I walked to my unheated car in freezing wintry weather I already felt wet and cold.

For more than 25 minutes I sat less than 2 houses away from my destination, willing that train to move before I died in my own unheated car – of frostbite. I imagined magic bridges forming over the stationary train. I imagined electric saws separating the car that sat in front of me and huge cranes pulling that car off the track. I imagined my own helicopter flying over the train and landing me in the front yard of the babysitter. I imagined jumping in the engine, removing the driver and moving the train myself. But none of these fantasies transpired.

Finally – finally I heard a chug and probably 15 minutes later, after the 2,000 car train (I may be exaggerating) passed the gates, I drove over the tracks and parked in front of the house.

Now I want you to imagine getting out of your car with no legs beneath you. If you knew you didn't have legs, you probably wouldn't have gotten out of your car. I didn't know that I wouldn't be able to feel my legs until I fell against my car. As a matter of fact, I felt nothing but movement in my hips as I willed one leg and then the other to move.

With each excruciating step, I hobbled to the steps, held onto the sides of the stairs, pulled myself up the steps, and rang the bell. When my daughter's babysitter saw me, she invited me inside to the fireplace. My foot had frozen inside the boot though, so I couldn't remove it – the boot; not my foot.

I really just wanted to get home, but I ended up sitting by her fire for nearly an hour – thawing. And then I did the only thing a reasonable human could do – I found another babysitter and another job, which, by the way, still didn't meet my bills, but I was getting closer.

Fast forward 40 years. I have never made enough to live on, but now I can do what I love to do – write, crochet, and take care of my grandkids!

Want to read more from this author? Please see the sidebar, or click Gallery of Posts and THANK YOU for visiting!

GUESS WHAT! You can MAKE MONEY WRITING! How? By clicking HERE!