Looking for a book to read or share this holiday season? Here are 10 books to get you started! A special thanks to Donna Cavanagh of HOPress-Shorehouse Books for the love of her authors and for sharing the following books with me, so that I can offer them to you.
Each year, HOPress-Shorehouse Books highlights the titles published in the last year. Our authors are talented, creative, funny, scary, educational, and inspiring. Please support our authors who gave their all to make their writing dreams come true.  Please stop by HOPress-Shorehouse Books and see our full catalog of authors too. Our goal is and always has been to help writers get their work to book lovers everywhere, and that is why our mantra is Independent Publishing with a Traditional Flair.
More Scripture Scribbles: Cartoons from the Choir Loft by Phillip Dillman 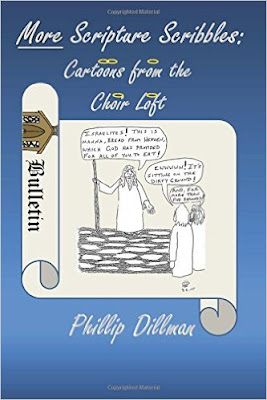 More Scripture Scribbles: Cartoons from the Choir Loft is Phillip Dillman’s second book. The first book of cartoons clearly tickled the funny bone in people of all faiths. His drawings might at times be irreverent, but they always demonstrate that Dillman is above all a man of faith. Dillman sings in his church choir and sketches cartoons about the day’s sermon. His scripture scribbles, which are conceptualized and drawn in a span of about 15 minutes, add a humorous twist and perhaps a bit more appreciation to the traditional Bible stories.
The Promise in Plan “B” by Mary Farr 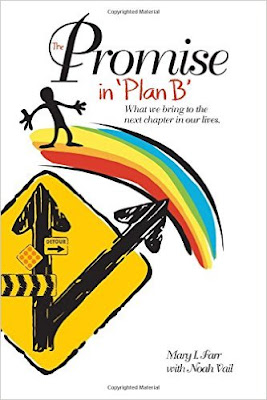 Life offers us plenty of opportunities. We construct our life plan—our Plan A, but life is never so simple. It tests us with setbacks, dead ends, hellos, and good-byes. To put it simply: Sometimes, we get stuck. However, The Promise in Plan B confronts fears about these changes and obstacles and encourages readers to develop a new life path. This book is grounded in the reality that life tends to be a series of interruptions, and we each possess a wealth of resources to initiate, investigate, and recreate the way we travel through our shifting courses. Unlike predictable job skills, these resources emphasize resilience, courage, imagination, humor, curiosity, and more.

Author Mary Farr includes personal stories and profiles of people from all walks of life who have faced challenges, despair, and unforeseen obstacles, but in the midst of the turmoil recognized their Plan B. This book explores themes of grace and gratitude seasoned with a generous dose of wit. Each chapter includes a Consider This section which contains questions and observations designed to encourage readers to open their hearts to new ideas. Farr also added journaling pages at the end of the book for those who would rather explore their reflections solo.
Opera For People Who Don’t Like It by Kathy Minicozzi 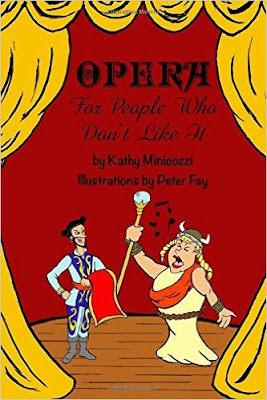 Opera might be one of the greatest of the performing arts, but it is also inherently funny. Who is more qualified to find the humor in opera than someone who has sung it for many years? Kathy Minicozzi strips away the boring, stuffy dignity and false glamour that people have imposed on opera for centuries and, like someone poking innocent fun at a good friend, spews plenty of knee-slapping, eye-watering hilarity.  In between the laughs, the author manages to drop real information, not only about opera itself but about the lives of the singers who perform it.
Winning a Debate with an Israel-Hater by Michael Harris 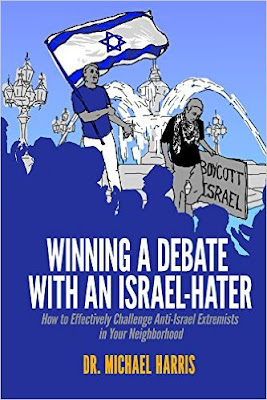 It often happens in the middle of an otherwise pleasant day -- you’re shopping, or walking across a college campus, and you encounter them. They’re holding signs that claim Israel is an “apartheid state” and charge Israel with committing “genocide” against Palestinians. They’re calling for boycotts against Israeli products and divestment from companies that do business with Israel.

You know supporting Israel is the right thing to do. And you’re not alone. For decades, polls have shown a large plurality, usually a majority, of Americans back Israel. But here’s the problem: you don’t know how to respond – or if you even should – to these Israel haters.

That’s where this book comes in. Imagine some of the key points from Alan Dershowitz’s authoritative volume, The Case For Israel-- as it might be delivered by Bill Maher. All the information you need in this street fight of words, but delivered in a light and accessible way, with satirical humor. So the next time you encounter a group of Israel-hating extremists, you’ll be armed with the facts – and the techniques to apply them with skill and confidence.
Do Lutheran Hunks Eat Mushrooms? By Paul De Lancey 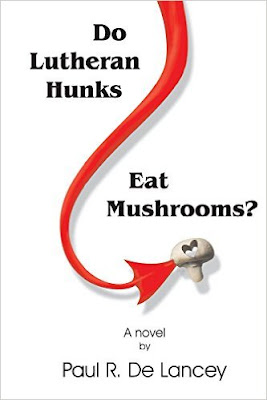 Debbie tells her sidekick, Bertram, a British cook, to change Joe’s memory, body, circumstances, era, and life, until the Lutheran becomes a man who will eat mushrooms. But there will be only so many attempts on Joe’s soul before she unleashes Armageddon out of spite.

God sends the angels General Lee and Pedro Erickson, a Mexican-Swedish chef, to protect Joe. They fight back with Heaven’s culinary weapons, tacos and Swedish meatballs.

Along the way, Joe changes into a fun-loving dinosaur and a Greek warrior with an ass harder than bronze before being sent to Hell for nonpayment of his hospital bill. Can Lee and Pedro Erickson save the soul of a Lutheran hunk and prevent Armageddon? Ja caramba.

Our Bodies, Our Shelves by Roz Warren 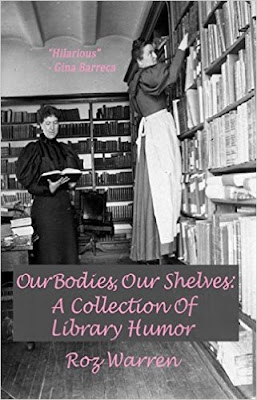 There are eight million stories at your local public library – and not all of them are in the books! Join humorist Roz Warren (“the world’s funniest librarian”) for a fascinating behind-the-scenes look at library life. What really goes on behind the circulation desk? And in the stacks? Roz, who writes for everyone from the New York Times to the Funny Times, tells all! What’s the single most stolen item in any public library? What’s the strangest bookmark ever left in a library book? What’s the lamest excuse ever given for not returning a DVD on time? And what does your favorite librarian REALLY think of you? In twenty entertaining essays, you’ll meet librarians fighting crime, partying with porn stars, coping with impossible patrons, locating hard-to-find books, and saving the world. The most closely guarded library secrets will be revealed. You‘ll never look at your local public library the same way again!

“Hilarious!“ Gina Barreca, author of They Used To Call Me Snow White, But I Drifted.
Above the Fries by John Chamberlin: USA Books Finalist in Humor 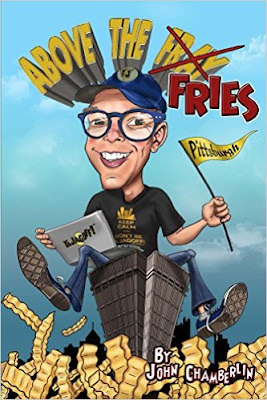 Everything "Pittsburgh" has fries on it…salads, sandwiches whatever! This book is a culmination of silly, stupid and ign’ernt stories of jagoffery from the Pittsburgh blog, YaJagoff.com. For those who are not familiar with term Jagoff, it refers to stupid politicians, awful sports officials, dumb criminals, bad drivers, ignorant people, and so on. However, it is not a swear word, and in fact, it is sometimes used as a term of endearment. Through this series of rants about “Jagoffs” from all walks of life, Chamberlin writes with passion about Pittsburgh and his love of “The Steel City,” and he has even developed a cadre of worldwide "YaJagoff Catchers" who submit their own rantings from wherever they live, which he posts on his site. If you live in Pittsburgh, lived in Pittsburgh, or just love anything Pittsburgh, this is the book for you!
Divorce After Death. A Widow’s Memoir by Concha Alberg 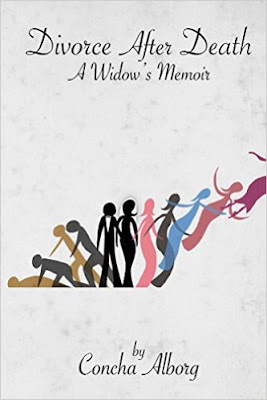 Concha Alborg didn't think that anything could hurt her more than the death of her husband from cancer, but hours after his death she learned how wrong she was. Within days of being made a widow, this Spanish College Professor discovered that her marriage and her husband were not what she had envisioned. With a unique point of view, due to her bi-cultural background, and a self-deprecating humor, she takes us on a personal journey. Her strength and determination to build a new life led her down a path that allowed her to reject the veil of widowhood and instead embrace a life of happiness, love, and acceptance.
Showering with Nana: Confessions of a Serial Killer Caregiver by Cathy Sikorski 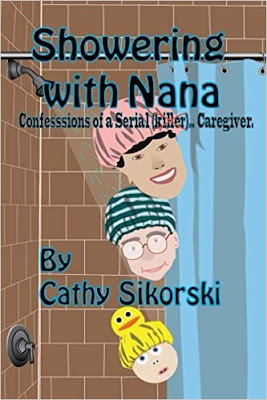 What happens when a two–year-old and a 92-year-old join forces and conspire against their primary caregiver? The picture is at times not pretty, but it’s always heartwarming and witty. Elder care attorney Cathy Sikorski penned this memoir about her days as a stay-at-home mom whose life is turned upside down when her Nana moves in. In between the adventures and misadventures that ensue when the toddler and grandmother become allies, Sikorski learns about patience, the importance of humor, and the joy that results from a well-deserved nap.

Scooter and Skipper Blow Things Up! By Con Chapman 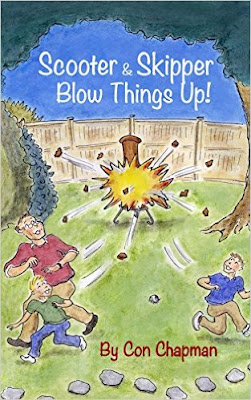 There is no stronger tie than that which binds a father to his sons. Well, maybe the one that connects sons to their mother, but that’s different. The father-son relationship is one that hums to mystic chords of foolishness and bravado; a mother comes into the room and suddenly a strain in A minor is heard, and it’s time to take a bath and go to bed.

For men like me who grew up without brothers, sons are another chance at a boyhood we never knew; a chance to punch your sibling in the arm and not get double-crossed by a two-timing broad or the first time in your life as your sister yells “Mom—he hit me!” down the stairs after she told you to do it!

These stories are an account of my journey through my sons’ first childhood as I experience my second. I’ve changed my kids’ names to the all-purpose generic monickers “Scooter,” the older of the two, and “Skipper” his younger brother, to protect their innocence. The statute of limitations on what some would call arson is apparently quite long.

These tales of youthful hi-jinx under one dad’s semi-adult supervision will demonstrate for you the truth of the age-old adage:

You’re only young once, but you can remain immature—forever.